There are over 900,000 different species of insects worldwide, plus even more that we haven’t named yet. Fortunately, not all of these creatures occur in the USA or cause any harm to mankind.

The order of stinging insects, called Hymenoptera, comprises around 17,500 known North American species. Like all insects, these ants, bees, and wasps have a vital role in the environment, but they can cause problems when they stray into our homes and businesses.

Keep reading to learn more about the most common stinging insects and what you can do about them.

These bees are the result of cross-breeding the East African lowland honey bee with various European subspecies to increase commercial honey production.

In 1957, 26 swarms of these bees escaped quarantine in Brazil and subsequently spread to North America.

These bees are more aggressive than our native honey bees and react quickly to disturbances. They’re one of the few bees that will actively pursue their target.

They prefer to nest in the ground and will actively defend their nest if they feel threatened. En masse, angry Africanized bees can kill humans and even large mammals like horses.

If you notice these stinging insects making themselves at home in or near your workplace, there’s no way to tell from afar if they’re Africanized bees. It’s best to get expert help to avoid a serious incident.

Honeybees play a critical role in nature and are responsible for pollinating over 85 different species of plants, including food crops we rely on for survival.

They’re highly social insects and live in hives that may grow to house up to 80,000 inhabitants. They prefer to nest in tree cavities, but they will also build nests under the edges of objects in an urban environment.

Honey bees aren’t as aggressive as Africanized bees, but they can still deliver a nasty sting, which can prove fatal if you’re allergic to bee stings.

Always get expert help if you notice an abundance of bees in your home or workplace, as they may have a nest nearby. An expert bee removal service will ensure these creatures find a new home where they can fulfill their role without endangering humans.

Carpenter bees earned their name thanks to their habit of burrowing into wood. They’re mostly harmless, although the stingerless male bees may put on a show of bravado if they feel threatened.

Female carpenter bees have a powerful sting but rarely use it unless they’re under extreme threat.

Although these bees pose no threat to your family or your employees, their wood-boring ways can cause unsightly damage to property and weaken your building’s infrastructure.

The European hornet is the only species of true hornet found in North America. It came to the continent with European settlers in 1840.

European hornets aren’t particularly hostile toward humans, but they will deliver a series of stings if you threaten them. In most cases, stings result from people inadvertently stepping on or touching them.

It can also get aggressive around food sources and its colony nest, usually in dark places like tree trunks. They typically conflict with humans due to their scavenging activities.

If you notice hornets hovering around your eating areas or rubbish bins, get in touch with a pest control company before somebody gets hurt.

Mud daubers are a type of wasp that build their nests out of mud. These nests may look like long pipes against a wall or simply comprise what looks like a pile of mud in a corner.

They’re long, slender wasps that can grow up to an inch in length. They’re non-aggressive and possess a mild venom.

When threatened, they can deliver a painful sting, although you’ll experience less pain and swelling than you would from a bee or wasp sting.

The nests often have an umbrella-like shape. You’ll usually find them in protected locations like roof overhands, window and door frames, or under a deck.

They’re the least aggressive of all wasps and will only attack when threatened.

Yellowjackets have a yellow and black head and patterned abdomen and can grow up to an inch in size. They live in nests made of multiple rounded paper combs.

They may nest near the ground among plant roots and logs or higher up in tree branches or the eaves of buildings.

Yellowjackets pose more danger to other insects than to humans, but they will sting if they feel threatened. Since their stinger doesn’t detach, they can sting you multiple times, too. 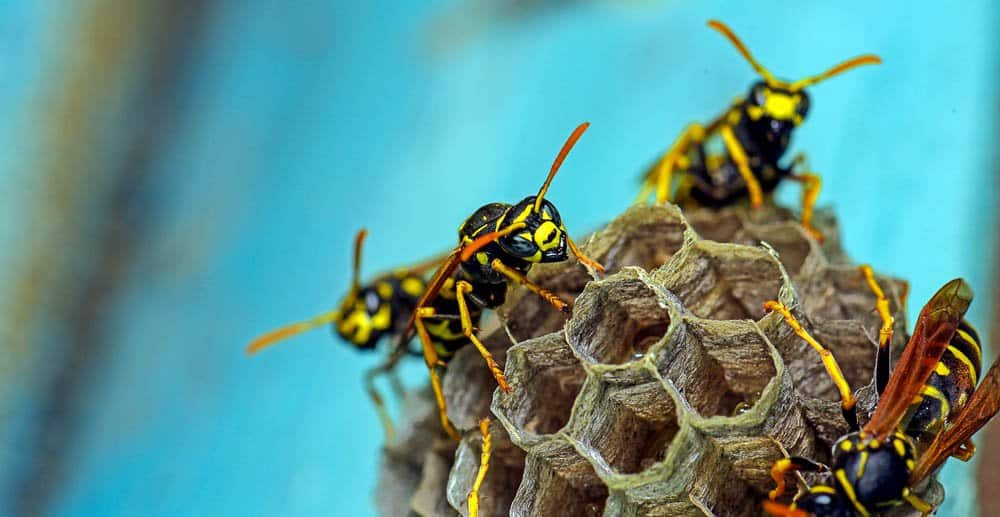 While most stinging insects don’t set out to harm us, it’s easy to conflict with them in your environment. If you accidentally bump a nest or step on a stinging insect, there’s a good chance they’ll defend themselves.

For safety’s sake, it’s best to remove or repel wasps, bees, and hornets as soon as you notice their presence, for their sake and yours.

Home remedies can keep some kinds of stinging insects at bay, but you need professional assistance for real peace of mind.

If you need help controlling stinging insects in the Piedmont-Triad and Sandhills, Pest Management Systems can help eliminate these pests. Get in touch to end your pest problems and ensure your family’s health.

While these steps/tips will help reduce the likelihood of stinging insects, there is no guaranteed way to eliminate all risks.