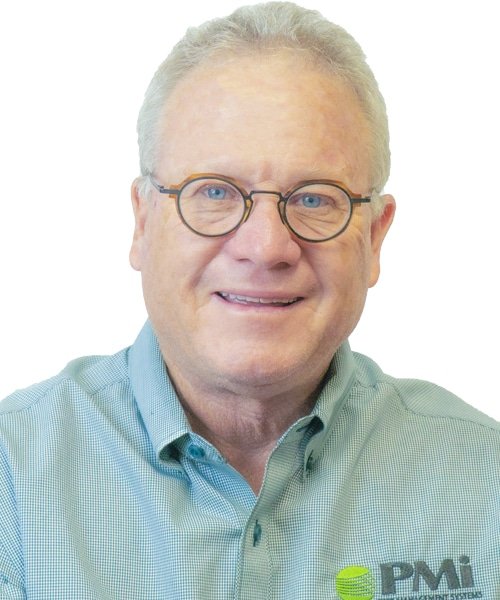 Born and raised in Greensboro, North Carolina, Billy Tesh has been in the pest control business since age 14. He is the President and founder of Pest Management Systems Inc., and with over 47 years of experience he has proven himself as a leader, collaborator, and contributor in the industry and his community.

Tesh graduated, with honors, from North Carolina State University and with the help of his wife, Laurie, founded PMi in 1984. Billy has two grown and married daughters with children of their own. His family spirit has translated into a very family-oriented workplace which is usually the top answer when anyone is asked why they like working at PMi.

With an endless energetic attitude and innovative spirit, Billy has also started and maintained several other successful businesses. After the success of PMi, our sister company Groundworks, was founded in 1995; PestOne in 1999; Crawlspace Care Technologies in 2006; followed by Crawlspace Depot in 2011.

Mr. Tesh has held countless positions on boards and elected offices. He has been a valuable member of the North Carolina Pest Control Association for over 35 years and after rising through the ranks with the North Carolina Pest Control Association, Billy was elected President in 1987. He worked extensively as a member of the Greensboro Builders Association, earning Associate of the Year in 2003, Recruiter of the Year in 2004, and elected President in 2008. In 2009, he was the proud recipient of their highest award, The Eugene Gulledge Outstanding Service Award. He has been a member of the Greensboro Science Center Board of Directors for over a decade and has given his time and resources to help many causes and organizations in his community. He has a life-long commitment to helping Habitat for Humanity and has raised money to help raise over 65 roofs in the Greater Greensboro area. With innovation and compassion, he has helped make a difference with other organizations like Camp Weaver, Victory Junction, countless homeless shelters, Greensboro Urban Ministry, Make a Wish Foundation, Operation Smile, the Town of Summerfield, and many others. His dedication for helping and his work to give back to his community was made more widely known when he was awarded NC State University Outstanding Alumnus Award in 2003 and was named Outstanding Philanthropist of the Year in 2014, by the Association of Fundraising Professionals NC, Triad Chapter.

PMi and Tesh are proud members of many local, state, and national organizations that are helping make positive change. Over the last 35 years, Tesh has worked with lawmakers in Washington, DC on important legislation affecting the pest control industry, lobbying for the good of the industry and betterment of the country. He has been active in public policy, legislative committees and was awarded the FMC Legislative Award in 2017 for lifetime achievement recognition in industry legislation. He says pest control is more than just protecting homes and health it is about making a difference in people’s lives. He is doing just that, Mr. Tesh a longtime member of the National Pest Management Association was elected to the Board of Directors in 2011 serving as Secretary, Treasurer, and became President of this international organization in 2014. He has dedicated countless hours to helping make outstanding contributions within the Pest Control Industry and has been awarded the PCT (Pest Control Technology) Crown Leadership Award and recently being inducted into one of the industry’s highest awards and achievements, the PMP(Pest Management Professional) Hall of Fame.

Billy has made an impact in the world of pest management and the people whose lives he has touched. As pests continue to grow and evolve, he continues to learn, improve, and keeps working harder in this industry. Mr. Tesh is a staple in the community and is continuing his mission to try and make it better and bring people together.  The bugs don’t stop and neither does PMi or Billy Tesh!