Learn About Raccoons & See How They Live

Everything You Need To Know About Raccoons

Raccoons are common across the United States and other parts of the world. Ideally, they will make their home is a shaded spot close to a water source, but they are also found in urban areas. They have adapted to the presence of humans although it is unlikely that you will spot one.

Raccoons try to avoid people and aren’t known as social creatures. They are also nocturnal and do most of their sleeping during the day, so it is rare to run into a raccoon. While they are known to scavenge in trash cans, they only resort to this behavior when food is scarce. They would much prefer their usual diet of fruits, vegetables, nuts and invertebrates including frogs, fish, crayfish and insects. 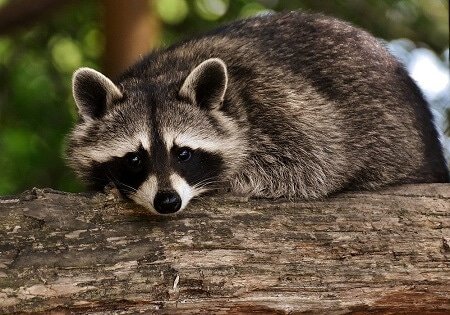 Raccoons have paws with five toes that allow them to be nimble when handling food and other items. They will often make a handwashing motion with their paw and dip their food in water. Initially, scientists speculated that raccoons were actually washing their food, but further observation revealed that wetting their hands actually increases sensitivity and allows them to take in more information. They have nerve groupings located in the hairless sections of their paws that can be enhanced by water. Since they don’t have strong eyesight, they use their paws to feel for food and learn about what they are about to eat.

These animals are also known to be incredibly clean. They will have a home range area that can be anywhere from 1 to 18 square miles and they will dig holes to use as a latrine in order to keep this area clean.

Another distinguishing characteristic of the raccoon is the black band of fur that runs across their eyes and makes them look like tiny bandits. This is thought to reduce glare at night so that raccoons can see better in the dark as they hunt for food.

While raccoons may look cute and cuddly, they don’t like to be approached by humans and they will attack when they feel threatened. Raccoons are also known to be carriers of rabies, leptospirosis and roundworms. If you find raccoons rummaging through your garbage it is best to stay away.

Baby raccoons are typically born in early summer after a gestation period of around 60 to 70 days. A female raccoon can give birth to up to seven offspring at a time. During the first couple months of life, the babies will live in a den while they are slowly weaned. At around 12 weeks, they will begin to leave the den and will stay away for an entire night. Once they reach 8 to 12 months, they are totally independent and about the size of a small dog. They will live for 2 to 3 years.

If you have noticed raccoon activity in or around your home, it may be time to call a pest control expert. While it is rare for raccoons to enter homes or build dens under houses, it can happen. At PMi Pest Management, we can assess your situation and provide you with the best pest solutions.