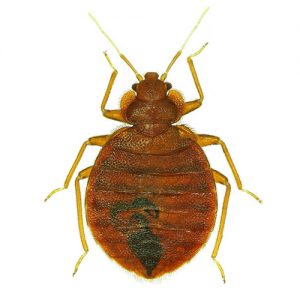 What Are Bed Bugs?

Bed bugs likely get their name from their habit of feeding on humans while they sleep in their beds. They are found in virtually every place people tend to gather, including residences, hotels, schools, offices, retail stores, and even public transportation. Bed bugs have become more prominent over the past 20 years and it’s important to protect yourself from taking these extraordinary hitchhikers home.

If you do identify bed bugs in your home, contact us immediately. First, we will inspect your home or business to make sure of the infestation. From there we can offer multiple treatment routes that fit your level of infestation.

Bed Bugs like to hide in small cracks and crevices close to a human environment. They can be found behind baseboards, wallpaper, upholstery, and in furniture crevices. Bed bugs are also known to survive in temporary or alternative habitats, such as backpacks and under the seats in cars, busses and trains. If you can slide a business card into a crack, then a bed bug can most likely fit there.

Although bed bugs can dine on any warm-blooded animal, they primarily dine on humans. Bed bugs do not transmit diseases, but their bites can become red, itchy welts. Infestations can quickly get out of hand as bed bugs reproduce exponentially.

The common house spider randomly selects its web sites and creates a tangled web. If a web does not yield prey (food) it is abandoned, another site is selected, and a new web built. Eventually, successful webs are constructed where air currents bring in prey. House spiders have a difficult time surviving in modern homes due to low humidity and fewer insects for food. They are more likely to be found inside structures like garages, sheds, barns and warehouses. Outside, these domestic spiders are often around windows and under eaves, especially near light sources that attract prey.

Inside structures, house spiders are most likely to be found in upper corners, under furniture, in closets, angles of window frames, basements, garages, and crawl spaces. In warehouses, they are common in corners near doors that stay open. Because of their web site selection by trial and error, many house spider webs may be constructed in several days. Dust collecting on these webs accentuates their presence.

Common house spiders are nuisance pests, but they pose no threats to humans. However a related species, the black widow spider, is considered a medically important pest.