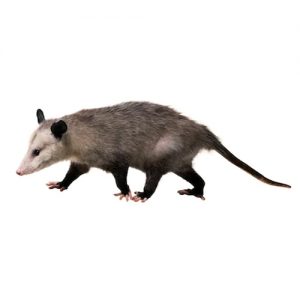 Opossums are the only marsupial found in North America. They live in many parts of the United States except for the Rockies, western plains and parts of the northern region. Opossums usually live alone and are only active at night. Though a relative of the kangaroo, opossums are much slower and produce a nauseating smell when threatened. These wild animals can survive in a wide range of conditions and locations by virtue of their flexible diets and reproductive habits. If you are dealing with an infestation, opossum removal should be handled by a PMi Certified Wildlife Specialist.

Opossums grow up to 40 inches in length, about the size of a house cat. Their bodies are covered in white or grayish hair. Opossums have a long, pointed face with round, hairless ears and a rat-like tail. Additionally, females have a pouch on their stomach for holding newborns.

Although the average person may use the terms “opossum” and “possum” interchangeably, they are different. An opossum is a white and gray marsupial that is found primarily in North America. In contrast, a possum is the name used to describe a marsupial found in Australia, New Zealand and China that is similar in appearance to an opossum. Their name derives from the term “opossum.”

In order to prevent an opossum from taking up shelter in a residence, homeowners should store trash in sealed receptacles with animal-proof lids, preferably in a locked shed or outhouse. It’s good practice to bring pet food dishes inside at night to avoid attracting opossums and another nuisance wildlife. Homeowners should also remove other obvious sources of food and shelter from the property, such as fallen berries and fruits, as well as woodpiles and logs. On a nice day, Inspect the outside of the home for holes and access points, such as broken vent covers.

If you suspect an opossum infestation in your home, contact a PMi Licensed Pest Professional to conduct an inspection and work with you to develop an opossum treatment plan. Opossum removal techniques such as traps and fencing may be used. PMi can also provide more helpful opossum facts that can help prevent future infestations.

Opossums will seek out existing structures such as garages, hollow logs, tree cavities, brush piles or burrows of other animals when looking for a home. They prefer environments near streams or swamps but can also live in diverse areas, ranging from arid to moist, wooded to open fields. Opossums prefer a home with proximity to food and water.

Opossums sometimes den in attics and garages where they may construct a messy nest. They can also tear ductwork or insulation if they gain access to the interior of a household. When digging for food, they can also damage lawns. In fact, opossums can destroy poultry, game birds and their nests. When startled, opossums can bare their sharp teeth and hiss. In rare cases, opossums may bite if they feel threatened.

Although the lifestyle habits of opossums make them seem like prime hosts for rabies, they rarely contract the disease and are even less likely to transmit it. However, opossums can carry a slew of other diseases, such as leptospirosis, tularemia and tuberculosis to name a few. They may also become infested with fleas and mites, especially in urban areas.