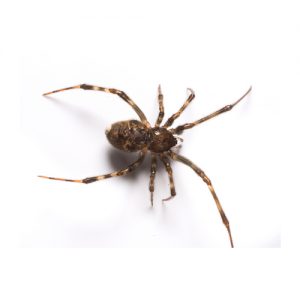 What Are House Spiders?

The common house spider gets its name from the fact that it is usually the spider most often encountered indoors. It is a nuisance pest, probably more because of its webs than the spider itself. The house spider is found worldwide and is common throughout the United States and Canada

Female house spiders lay about 250 eggs in a silken sac that is brownish in color and round in shape. There may be more than one sac in the web at a time. A female house spider may produce up to 17 sacs, containing a total of more than 3,760 eggs, in her lifetime. The eggs hatch in about 7-10 days. Adults may live for a year or more.

Adult female house spiders have an almost spherical abdomen and are roughly 3/16-5/16″ (5-8 mm) in length. Their male counterparts have elongated abdomens and are about 1/8-3/16″ (3.8-4.7 mm) in length. For both females and males, the color is highly variable.

House spiders have eight eyes with two lateral pairs almost touching. The last tarsal segment of the fourth pair of legs has a row of serrated bristles.

Signs of house spider infestations include seeing the spider and its webs. A PMi house spider control professional may be necessary.

How to Get Rid of House Spiders

To prevent common house spiders from entering the home, seal cracks around the outside of the house using a silicone-based caulk. Also, screen windows and doors. If you find a house spider inside, you can get rid of it by using a vacuum to remove adults, egg sacs and webs. If a broom is used, adult house spiders can usually escape. Contact a licensed PMi Pest Professional if you suspect a spider infestation in the home.

House spiders are not known to bite but may do so in threatening situations, such as when they are being crushed. While house spider bites are typically not medically threatening, it is important to seek medical attention in the event of severe swelling, lesions or headaches.

The common house spider randomly selects its web sites and creates a tangled web. If a web does not yield prey (food) it is abandoned, another site is selected, and a new web built. Eventually, successful webs are constructed where air currents bring in prey. House spiders have a difficult time surviving in modern homes due to low humidity and fewer insects for food. They are more likely to be found inside structures like garages, sheds, barns and warehouses. Outside, these domestic spiders are often around windows and under eaves, especially near light sources that attract prey.

Inside structures, house spiders are most likely to be found in upper corners, under furniture, in closets, angles of window frames, basements, garages, and crawl spaces. In warehouses, they are common in corners near doors that stay open. Because of their web site selection by trial and error, many house spider webs may be constructed in several days. Dust collecting on these webs accentuates their presence.

Common house spiders are nuisance pests, but they pose no threats to humans. However a related species, the black widow spider, is considered a medically important pest.