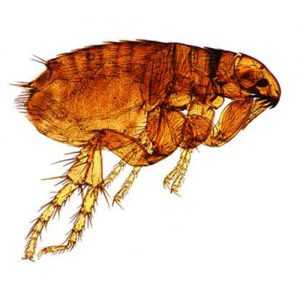 What Are Dog Fleas?

Fleas are common parasites that feed on the blood of warm-blooded bodies. Fleas cause discomfort because of their irritating bites, but also because they can transmit several diseases. Dog fleas are one of the type of fleas found in homes. Dog fleas get their common name from dogs being one of their two favorite hosts, with rabbits being the other.

Adults dog fleas are about 1/8″ (2.5 mm) in length, are laterally flattened and wingless. Their body is brownish-black to black in color but may appear reddish black when full of blood. Like cat fleas, dog fleas have disproportionately small heads and six legs with the hind ones capable of jumping large distances.

Dog flea bites can cause itchy red bumps, typically located on the armpit or in the fold of a joint such as the elbow, knee, or ankle.

Signs of a Dog Flea Infestation

Seeing an actual flea is the most obvious sign of an infestation. Observing a dog excessively scratching, seeing flea bites on dogs, and licking or biting at their skin are other signs of a dog flea infestation.

Homeowners should give PMi a call to develop a flea treatment program. Frequently vacuuming all upholstered furniture, floors and carpeting can help to remove flea populations and prevent them from laying eggs.

Pet owners should practice active flea management by keeping dogs on a leash when outside, bathing, and grooming pets regularly, visiting a veterinarian annually and using flea treatments according to the direction.

Dog fleas can live for about 100 days, during which time the females produce 400-500 offspring. Their biology and habits are the same as cat fleas. Dog flea eggs are deposited on dogs in between their hair. They usually hatch in 1-12 days. The larvae require feeding on dried adult fecal blood to complete development. Dog flea larvae spin cocoons and emerge after several weeks, usually when the temperature increases or vibrations force them out. Adults seek a blood meal on the second day after emergence. Once a dog flea finds a host, it will feed, mate and lay eggs on it.

Depending on conditions, adult dog fleas usually only live for a few days, because normal dog grooming removes up to 50 percent or more of the fleas. Otherwise, they can survive for several months.

Dog fleas primarily feed on dogs but, when populations are large, they can bite humans.
Fleas are the most common transmitter of the rare bubonic plague. They also transmit the bacterial disease murine typhus to humans through infected rats. Both dog and cat flea saliva can cause serious flea allergy dermatitis in pets and their debris has been reported to cause similar allergic reactions in humans. Fleas can also transfer tapeworms and cause anemia in pets, which is why active flea management is an important component of pet care.