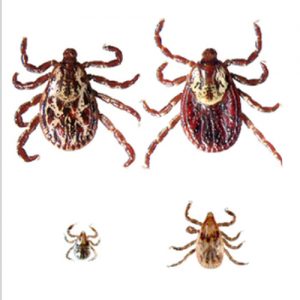 What is an American Dog Tick?

Also known as the wood tick, the American dog tick gets its name from the fact that adult ticks prefer to feed on domestic dogs, coupled with the tick species being found only in North America. The American dog tick is a member of the hard tick family, meaning that it possesses a hard exterior shield. American dog ticks are known to harbor bacteria responsible for causing diseases in humans such as Rocky Mountain spotted fever, which is spread when they suck blood from their host. Exposure to these ticks is most likely to occur during spring and early summer.

Oval and flattened in shape, American dog ticks are brown with whitish to gray markings. As larvae, they have six legs while nymphs and adults have eight. These extremities allow them to effectively crawl through their environment, as well as animal fur and human hair. Depending on whether or not they have fed on host blood, American dog ticks can range in size from 5 mm to 15 mm.

If an American dog tick has bitten either a household member or a pet, you may have cause for concern. Additionally, properties with tall grass and outdoor pets are more likely to attract American dog ticks. Sightings, in places such as gardens and potted plants, signal a potential infestation, as these are common areas for females to lay their eggs.

American dog tick bites can cause itching, fever and, in some cases, tick paralysis. Be on the lookout for the development of rashes near the tick bite, as this is the primary symptom of tularemia and Rocky Mountain spotted fever. Ticks are not able to feed immediately after latching on to a host, as their mouthparts require several hours to imbed deeply enough to feed. This makes it very important to promptly remove a tick from the skin at first sight.

How to Get Rid of American Dog Ticks

In order to avoid being bitten by an American dog tick, apply an insect repellent containing an EPA-registered ingredients, such as DEET, picaridin or oil of lemon eucalyptus. Also, consider wearing long sleeved shirts and pants, preferably light colored so ticks will be easy to detect, and tucking pants into socks. To get rid of ticks and limit risks indoors, inspect clothing and skin when heading inside. Immediately wash any clothes worn outside.

If you have a bite from an American dog tick, use fine-tipped tweezers to grasp it as close to the skin’s surface as possible. Pull upward with steady, even pressure. Don’t twist or jerk the tick as this may cause the mouthparts to break off and remain in the skin. Once the tick is removed, thoroughly clean the bite site with soap and water. Then, flush the tick down the toilet or wrap it in a tissue before disposing in a closed receptacle. Individuals can take added precaution by saving the tick in a sealed bag to be tested for any potentially harmful bacteria.

Homeowners with outdoor pets and tall grass are at higher risk for coming into contact with American dog ticks. In order to prevent any type of infestation, make sure to keep the grass around the home well-trimmed, and inspect pets and people closely after outings. If you suspect a tick problem on the property, contact a PMi pest control professional.

It is thought that American dog ticks are attracted by the scent of animals, so they are common along roads and trails. They also prefer grassy areas with low vegetation where larger mammals pass by. These pests thrive in areas where grasses, bushes and plants are accessible to humans. While American dog ticks choose habitats that maximize their exposure to potential hosts, they can survive for about 2-3 years (1,053 days) unfed. Adult American dog ticks prefer to bite domestic dogs and can therefore be brought into the home and potentially transferred to humans.

When they are ready to lay their eggs, adult female American dog ticks will detach themselves from their hosts and search for a suitable egg-laying location. Over 14-32 days, she will lay as many as 6,500 eggs and then die. The eggs typically hatch in 36-57 days, during which time the larvae emerge and seek out small hosts, such as mice. Engorgement often requires six days, but the larvae can survive up to 584 days unfed. After sufficiently feeding, they will drop off the host and look for a place to molt into nymphs. This process usually takes about 24 days. Depending on the climate, the entire lifecycle of an American dog tick (egg to egg) can take anywhere from three months to more than one year. In the northern United States, it’s common for the lifecycle to last two years.

Another disease American dog ticks are known to transmit is tularemia, which is caused by the bacterium Fracisella tularensis. It is transmitted from rabbits, mice, squirrels and other small animals. Symptoms include fever, chills and tender lymph nodes. An ulcer may form at the tick bite site.

In addition, American dog ticks can cause tick paralysis, which can lead to severe respiratory distress and muscle weakness in those affected. If you believe you have contracted one of the American dog tick diseases mentioned above, please call a healthcare professional.