Learn About Bats & See How They Live

Bats tend to be misunderstood. However, they are an essential part of any ecosystem and incredible mammals with distinct characteristics that make them unique. Learn more about these creatures.

Bats tend to get a bad rap, but they are actually incredible creatures that play an important role in any ecosystem. In North Carolina, there are 17 different species of bats and these flying mammals eat up to 4,500 insects per night, help with pollination and spread seeds. Studying bats has also led to many important scientific discoveries and inspired feats of engineering. Learn more about these truly unique creatures.

Bats are nocturnal, but you can often see them flying overhead in the early evening and morning. While they have excellent eyesight, they use echolocation to navigate in the dark. They emit ultrasounds that can be detected by the human ear. These sound waves bounce off objects and allow the bat to collect information about their environment. This finely tuned tool can detect mosquitos and other objects as thin as a piece of hair.

Mating season for bats is in the spring and the fall. Throughout the rest of the year, males and females segregate themselves. Once the females become pregnant, they will band together to form a maternity colony. A baby bat, or pup, can grow to a third of the size of the mother, which makes it difficult for her to continue to fly. However, she has to continue to find food. While the mother can have 2-3 litters during the mating season, only one pup is born at a time. The pup will feed off the mother’s milk until their wings have fully developed and they are able to fly and find food on their own. 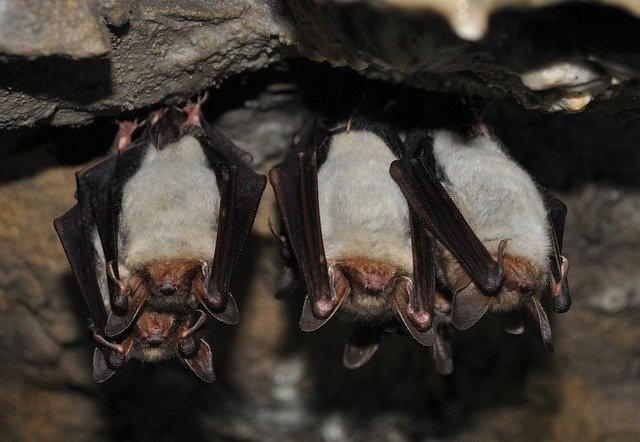 The Lifespan of Bats

One of the reasons bats are able to reproduce so slowly and still thrive as a species is because they have a relatively long lifespan. Bats can live 20 to 30 years. This is remarkable considering that the general rule of thumb is that smaller animals have shorter lifespans.

There are some animals that will eat bats, but they aren’t considered to have natural predators. Unfortunately, the biggest challenge that bats face is disease. White Nose Syndrome (WNS) has killed millions of bats and significantly impacted ecosystems. This disease is actually a fungus that grows on the noses of bats while they hibernate. The fungus affects their behavior and causes them to burn up essential fat that is necessary to survive the winter. While scientists aren’t sure how the fungus was first introduced, it is spreading quickly and experts are working hard to protect bats.

How To Remove Bats

During the roosting season when mothers are nursing their pups, it is illegal to remove bats from houses and other structures. The pups rely heavily on the mother for food and warmth and they won’t survive without their mother. That is why bats can only be removed after the pups have matured and are able to take care of themselves.

If you have bats in your attic, it is most likely a maternity colony that is working hard to care for their young. It is possible to safely and humanely remove the bats, but this must be done during the right time of year. At PMi Pest Management, we work to protect bats while also supporting homeowners. Contact us today for more information.